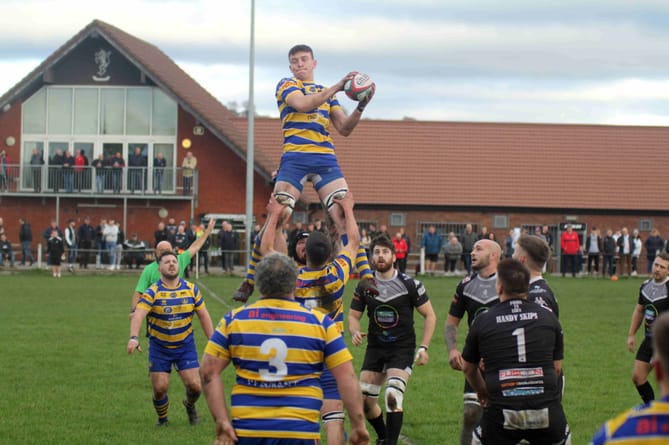 MONMOUTH failed to gain the reward they deserved in their first league match in 600 days, despite recovering from a half-time 22-6 deficit at Nelson and narrowly edging the second half 10-8, writes Nick Hartland.

Boys bounce back to beat Bromsgrove

How Dragon Ed reached for the skies after pool accident

Druids notch up another good win away from home

But the courage and determination the side showed is bound to bring some points in the table before long.Their continued attacks in the 22 in the last 20 minutes all but gained them the losing bonus point they so desperately sought and deserved.But Nelson’s defence was excellent, too, and the game ended with a bone-crunching tackle which forced a spilled ball and brought the final whistle.Having first paid their respects to the fallen with a minute’s silence before the start, and with Monmouth playing against the slope in the first half the game set off at the frantic pace it was to maintain.Within five minutes both sides had scored three points each from ruck infringements which the referee policed strongly throughout.Almost the whole half elapsed with possession and territory see-sawing equally with wing Matt Tabb and No 8 Tom Hawkins quite prominent with their counter-attacking and prop Tom Green making some strong carries throughout the match.But Nelson were first to score again to go 10-3 ahead with a try under the posts.Play moved towards extra time and as legs and lungs wilted a little playing up the slope, a deep attacking kick gained position enough to stretch the lead to 17-6.The pressure continued and despite their valiant goal-line defence, the visitors again found themselves stretched.And a long pass to Nelson’s speedy right wing brought the half-time score to 22-6 leaving Monmouth with much to do.However, they re-started with vigour and having been rebuffed four times near the Nelson line a ’no arms’ tackle allowed them a three-point clawback from the boot of fly half Harry Johnson whose kicking out of hand was even better.Nelson also had a good kicker and an attacking kick into the left corner saw the visitors lose a line-out and succumb to a driving maul and an unconverted try for 27-9.For all their battling spirit the line-out was probably Monmouth’s weakest area, but despite the hosts gaining another scoring penalty for a high tackle to make it 30-9, substitute front rower Joe Christopher was on hand soon after to complete a drive in the left hand corner which Johnson cleverly converted for 30-16.This set the scene for a period of all out attack in the final 20 minutes, stoically defended by Nelson and sealed by that bone cruncher to end it all, well into injury time.A good run out on a beautiful autumn day provided some further lessons to be learned by Monmouth, but also much encouragement in view of their great team-work and resilience when under attack.Elsewhere, Chepstow beat St Julians 15-10 at home in Division 3B East, while under the lights on Friday evening, Usk beat Abercarn 23-7 in Division 3A East.A last gasp score gave Abergavenny a 21-19 midweek home win over derby rivals Blaenavon in the Ben Francis Cup, but their Saturday Division 2 East league opener at Ynysddu was postponed.Monmouth’s next league game is at home to Dowlais a week on Saturday (November 27), when Usk travel to RTB Ebbw Vale, Chepstow visit Newport Saracens and Abergavenny host Talywain.WRU Division 1 EastNelson 30 Monmouth 16