Cash to be spent on resurfacing road 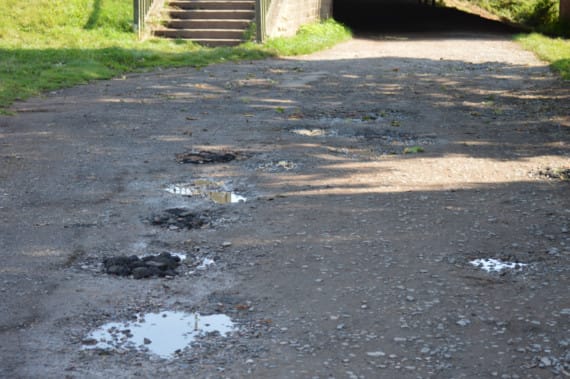 Efforts to resurface the road which leads up to the Two River Meadow and Monmouth allotments has made progress. The decision was made during one of the first hybrid meetings of Monmouth Town Council’s people and places committee which took place on Monday (October 11).

The maiden broadcast for the people and places committee went ahead with only minor issues, largely resulting from the acoustics of the Shire Hall. Councillors and press were able to participate or view the meeting using the Zoom conferencing software.The meeting was chaired by Mayor of Monmouth, Terry Christopher with assistance from Cllr Richard Roden, with officer Caitlin Williams working the broadcasting equipment.Whilst the technical elements of the meeting worked without a hitch, the echoey acoustics of the council chambers caused some difficulty for those listening in from Zoom.Hybrid meets have been taking place since early on in the Covid-19 pandemic by UK and Welsh governments, the first hybrid meeting for Monmouth Town Council was the planning meeting on Tuesday, October 5.The people and places conducted their usual business.The road to the Monmouth allotments made a reappearance on the agenda. During the last people and places meeting the Monmouth allotment association were making plans to improve the road leading down the Two River Meadow.A sum of up £10,000 was originally earmarked, but the allotment committee estimated that a full tarmac resurfacing would have cost more and thought it would be a better use of tax payer’s money to find a cheaper option. The group opted to ask for £4,650, which will be taken from the £10,000 already earmarked for the resurfacing. The project has already collected £3,750 for the road resurfacing.Under this new proposal, quarry scalpings will be used to resurface the road.The Beacon reported last month that Monmouth councillors met with allotment volunteers to make plans for how the road can be resurfaced.For the last few years, the allotment association have been trying to improve the road conditions, which lead up to the allotments in the Two Rivers Meadow, where the rivers Wye and Monnow meet.