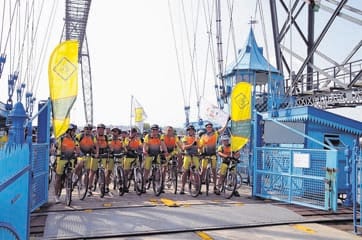 Cor Meibion Caldicot Cycle Cub, an offshoot from Caldicot's Male Voice Choir, will be putting their impressive lung capiticites to good use when cycling from Fishguard back to Caldicot from the 10th - 12th July. The avid cyclists are aiming to raise £10,000 for Prostate Cymru, with the bike ride just one of their fundraising efforts over the course of 2014. The journey will be ridden over three stages, with over 30 members joining at various times. Stage one will be ridden from Fishguard to Llanelli with an overnight stay at a campsite along the Millenium Coastal Path. The next day the group will proceed the 60 miles to Brecon, covering nearly 72 miles to Caldicot on the third day. Choralist and bike rider Tony Griffiths said the trip would test the group. "Most of us are in our 50s, we're not spring chickens," he said. "The choir is a great community. About three years ago we were looking to raise money and a few of us had bikes so we rode from Brecon to Cardiff. that turned into regular fortnightly or so rides and it has grown from there." Although the club will refrain from singing whilst riding, Tony said the group will enjoy a good sing-song when they return home to Caldicot, enjoying a well-deserved celebration on the 12th. Lyn Gauntlett from the club said: "Basically the cycle club was started a couple of years ago just to provide another social outlet for members of the choir should they like to join in and to raise money for deserving causes. "Prostate Cymru was chosen because one of our members was diagnosed with prostate cancer and through this we learned that about one in eight men in Wales will at some point develop prostate problems (not necessarily cancerous), which means that about eight to 10 of our members are currently suffering some degree of prostate issues. "We also wanted specifically to support a smaller Welsh based charity. "Since we are predominantly a male organisation, we thought that it would benefit a lot of men if we could raise awareness and encourage men to get checked out. The disease is highly curable if caught early so we could be saving lives. "Most women will go for cancer screening with no qualms, but try to get a man to go to the doctor for a test is nearly impossible until symptoms are well developed and often too late for successful treatment." In 2013 the choir, whose members range from 19 years of age to 92, raised over £6,000 for The Victims of Chernobyl Children's Trust, with a new charity chosen per year. The choir also support other charities by singing at events free of charge to raise funds, last year raising over £12,500 for charity in total. For more information about the choir go to http://www.caldicotmalevoicechoir.co.uk&quot;>www.caldicotmalevoicechoir.co.uk or visit http://www.choircycle.co.uk&quot;>www.choircycle.co.uk

Hopes for 275 jobs as part of petrol station, drive-thru bid

Five Monmouthshire houses that could be yours for less than £200k